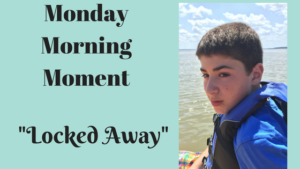 Last night, Marky was in the family room, with his sisters and dad, I was in the kitchen. I don’t know how long he was crying under a pillow, but his sister realized it well into his tears. This was the first tug at my heart, for not even knowing. He was buried under a pillow, trying not to be heard. Second tug, he doesn’t seek any attention.

We all tried to find out what had happened to make him cry. I think it is important to share that Marky is not one to cry easily. He has a really high threshold for pain and when he does cry, it is usually in response to seeing someone he loves either sad or angry.

This was a big, dirty cry. The kind I have when watching Steel Magnolias or The Notebook. He could not catch his breath and he could not tell us what was wrong.
His ability to express with words in any detail is one of his biggest roadblocks and it breaks my heart, because I know there is so much he wants to say. I tried many ways and many times to offer ideas to help him express. I asked him if he was sad, he said, “No, I am scared” – that was great! I asked him if he was hurt or angry, he said no. Finding out what he was scared of was another story.

I will fast forward and share that it seems that a video he watched often, made mention that the sky was falling. I asked him IF that was the thing that upset him. He said yes. Maybe it was, since he is so literal, he could have become worried. But, I will never know and that is the reason for my Monday Moment.

I went to bed so sad that he is stuck, that he cannot share his thoughts. I could see such a lost look in his eyes and I could feel his want to be able to tell me more. I was stuck on how I directed his answer and that he may have said that just to give me peace. That was the the third tug at my heart.

I know some days are worse than others, last night was one. Autism took our family on a trip last night that we all wish we didn’t have to go on.