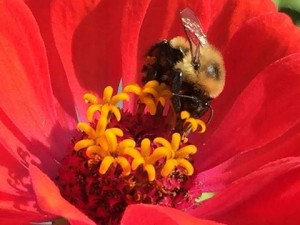 Hiverson emotionally retreated into himself under the stinging words of the others. Social errors were very hard for bees to deal with; after all, colonies are very closed circuits, and one mishap could result in a negative reputation among the hive. “Silver-Honey Hiverson”, the colony would soon be calling him. That is, if the colony survived; at this point, this seemed doubtful.
“Children, listen.” Everyone stopped laughing immediately and turned back towards the center. The Queen’s sweet voice had finally taken precedence over the chaotic chamber. Embarrassed as he was, Hiverson was glad that he’d helped her.
“The Silver Honey may be a myth, but that doesn’t mean there isn’t a grain of truth to it. Even if the honey is a myth, there may be something else up north – something that can stop the Skells. This hardworking drone may not have offered us a cure, but he’s offered us a chance. After all, we managed to stop the Skells somehow ten generations ago, did we not?
Her logic was more or less sound, and the bees continued to listen.
“For this reason, we make a proposal. Three bees will travel north and search for the hive with the Silver Honey -”
“Wait a minute… where would the hive even be?” a bee pointed out. “I mean, it’d probably look different somehow, but we can’t just search the entire North for it, can we?”
“Oh, IknowIknowIknow!” Another bee hopped up and down erratically, as if he was about to explode. From the bee’s energy and tone of voice, Hiverson recognized him as Beeter.
“Oh, do you know something of the hive’s whereabouts, Beeter?” the queen inquired.
“Yeahyeahyeah! So, I was outside this one morning, and I’d already collected the day’s share of honey, so I decided, ‘Hey, I should fly around a little and see the North!’ So I flew around and around and then I saw this weird hive. It looked like a regular hive, but silver! I wanted to go check it out, but I decided not to because it was almost time for lunch. So I flew home and had lunch – the honey was delicious that day!”
“Wait a moment. You flew to the North without permission or accompaniment? Do you have any idea how dangerous that was? You could’ve been attacked by the Blood Cardinal, or possibly by something even worse!”
“Yeah, I could have asked, but that would be boring! I’d have to fly slowly, and then I couldn’t go as far.”
“…*sigh*. We’ll discuss this incident later, Beeter. In any case, do you remember the direction of this Silver Hive?”
“Yeah! It was in the North!”
“We know it was in the North. Be more specific!” The Queen’s patience was being stretched to its limit. Beeter tended to have that effect.
“Okay. It was, uh… itwasthisway!” Beeter launched into a frenetic waggle-dance. He moved so quickly that it was almost impossible to read his movements.
“Slow down, for God’s sake!” the Queen shouted.
Beeter stopped for a moment. “…ugh, fine. You don’t have to be so grumpy about it, you know.” He resumed at a slower pace. It was still much faster than a typical waggle-dance, but now the other bees could interpret the specific direction.
“Good, good.” The Queen calmed down a bit, although she was still frazzled. “Now, as we were saying, three bees will travel north to search for the Silver Hive. The rest of us will try to manage the situation as best we can; we cannot send more, unfortunately, as the colony could lose stability if too many bees are lost to the Skells. Dearest child, as this undertaking is your idea, would you do us the honor of being the group leader?”
Hiverson didn’t have very much to consider. After all, this was his idea, and he couldn’t back out of it now. Besides, he owed it to the colony to see the situation through to its end. “Yes, my Queen. I will do my best.”
“I’ll go too!” Beeter piped up. “Better than staying here, after all. I can’t wait to fly all ov- I mean, explore the Silver Hive!”
“Good, good. Who shall be our third volunteer?” The Queen looked around at the assembly of bees. No one said a word for the longest time; the plan still seemed like a fool’s venture at best and a death wish at worst, especially with the Blood Cardinal prowling the skies.
Finally, a small, timid voice emerged from Hiverson’s right. “M-my Queen?” It was Barnabee’s voice; Hiverson had become so engrossed in the situation that he had almost forgotten about him.
The Queen turned her head towards Barnabee. “Yes, child? Will you venture forth for our hive as well?”
Barnabee took a step back. He was shaking now, just as he had been when he told Hiverson the bad news. Hiverson didn’t blame him; this would not be a safe journey, and in all truth he was scared too.
“Don’t worry, Barnabee,” Hiverson whispered. You don’t have to do this. Someone else will join the group, and then we’ll find that honey. You’ll be fine, and Charlie will be fine too.”
These words seemed to resonate with Barnabee. His shaking slowed, and he took a step forward. He looked up at the Queen.
“O-of course I’ll go,” he declared. “My friend has the Sk-skells, and… and I’m not going to let him die! I-I’ll do whatever it takes!”
“Wonderful! Now venture forth, my children, and make our colony proud!”
The other bees began cheering. The cheers made Hiverson feel good, although he knew that the same skepticism was still prevalent among the colony. Beeter danced the waggle-dance again, and the three bees flew to the North with the steady wind at their backs.

The first five hours were relatively calm. The wind remained steady, and the weather remained clear. There was no sign of the Blood Cardinal, despite the fact that this was his active season. Nor, for that matter, were there signs of any other birds in the area – no nests were in the branches, and no birdsong was ambient. This was normal, or at least it had been for the past five generations… Hiverson didn’t want to think about what happened to the birds that didn’t flee when the Blood Cardinal came. Despite this, though, the group’s spirits were up, and Hiverson believed that they would be able to get the Silver Honey without encountering the Cardinal.
Hiverson used the time to discuss the situation with the group. Everyone knew well enough what had happened, of course; he simply had an emotional need to “sort out” the situation in his own head. As it turned out, the others had the same need, and conversation was maintained relatively steady – at least when Beeter wasn’t flying ahead of the group. Barnabee constantly voiced his worries about Charlie – that is, he constantly worried about the whole situation, but Charlie was first and foremost in his list of worries.
In the middle of the sixth hour, clouds began to form. Soon they covered the sky, and the wind began to increase in speed. Rain was coming, and Hiverson knew that it would be best to seek shelter before the storm. Beeter protested – he wanted to “outfly” the rain – but after protests from Hiverson and Barnabee he decided to cooperate. The group decided to rest on a tree branch for the time being. When the weather cleared up, they would continue.
The rain began to fall, increasing in magnitude from a light drizzle to an all-out torrent. The area outside of the tree branch was obscured by the thick droplets.
“So, Beeter, how close are we to the Silver Hive?” Hiverson asked.
“We’re pretty close, I think. I remember that the last time I saw the Silver Hive, it was in the middle of a forest area with trees that looked like these.”
“…Are you sure? That doesn’t seem like a very sound judgment.”
“Yes, I’m sure! Come on, Hiverson, when have I ever steered you wrong?”
“Well, there was the time where you asked me to –“
“I meant in terms of navigation.”
“Oh. Well… I can’t really deny you in that case; you are the best waggle-dancer in the hive. Besides, you’re the only bee in the colony who’s even seen the Silver Hive… I’m sorry, Beeter. I’ll trust your judgment.”
“Good! Don’t worry, guys. I’ll get us to that Silver Hive in no time! Then we’ll make everything better, and the Queen will give us bee medals!”
“…Since when does she do that for anybee?”
“I don’t know, but she’ll definitely do it for us!”
“…Riiiight. So how are you holding up, Barnabee?”
“…”
“Barnabee?”
“Wh-what if there’s no Honey? W-what if this was all a lie?”
“Calm down, Barnabee -”
Barnabee began shaking violently. “I-If there’s no Honey, then they’ll all die! The Qu-queen and all my b-brothers will die!”
“Barnabee -”
“If there’s no Honey then Charlie will die! They’ll all die and-and it will be my fault!” Barnabee screamed. “It’ll all be my fault! All my -”
Beeter walked up to Barnabee and buzzed in his face. “Get a grip, Barnabee! None of this was your fault!”
Barnabee temporarily stopped shaking out of surprise. Hiverson pushed Beeter aside; Beeter meant well, but he clearly wasn’t cut out for this situation.
“Barnabee, don’t blame this on yourself. We couldn’t have known that this would happen. No one blames you for the Skells.”
“…I know, but… I feel like I could have prevented it somehow. I feel like-like if I’d done something differently -”
“It’s alright. The cause doesn’t matter now. All that matters is dealing with the problem in any way we can.
“But – but if there’s no Silver Honey – if-if there’s no cure… then…”
“Barnabee, there’s a cure out there somewhere. We’ve stopped the Skells before, and we can do it again. We will do it again. Even if there’s no Honey, there’s a cure out there. There has to be.”
“…”
“Listen. It’s been a stressful day for everyone in the colony. We’ll look for the Silver Hive tomorrow. For now, let’s get some rest. We need to refocus ourselves.”
“…Alright.”
With that, the bees closed their eyes. The steady patter of the rain filled their heads as they drifted off to sleep.

Cole is 15 years old. Cole has Asperger’s and is this site’s first young adult monthly contributor. Cole will write about a variety of topics. He started High School this year at an IT specialty center. He dearly loves pet sitting, and is a total pet whisperer!