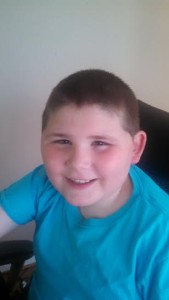 As stated in my previous article, I have Asperger’s Syndrome, which slightly impairs my social life, but I am still capable of going through society with relative ease and minimal stares from passersby. I do know someone who is less fortunate than I am, though: my brother, Tyler Szymonik. Unlike me, Tyler has full-blown autism, so he has great difficulty speaking, interacting with others, and generally functioning in society at large.

Tyler used to look almost identical to me, but now he looks very different. He has light brown hair and brown, childlike eyes. I am taller than him, but not by much.

While his personality is influenced by his autism, it is still unique to him. He enjoys simple pleasures, like being read to and playing. He is also very excitable and childlike in demeanor. Unlike animal-loving me, he is afraid of all manner of animals, conveniently ignoring the fact that technically speaking, as a human, he is one.

Autism has impacted him in many different ways. For one thing, he has great difficulty communicating with others, and consequently has a virtually nonexistent social life. He has to go to a special school – Grafton – because the traditional school system doesn’t fit him well. It’s hard being his brother – I can’t talk with him or play video games with him, and sometimes he lapses into hysterics for no apparent reason.

Despite all this, Tyler is my only sibling, and he is very special to me. Even though his autism separates us, I will always love him. I hope to write more about him in the future.

With regards, Cole. (I apologize for being so serious, I don’t want to joke about Tyler. I intend to be a bit funnier in the future, when discussing less serious subjects. Kumquat – that’s a funny word, I hope that it compensates for the seriousness of the rest of this article. Hey, I think that I’m thinking about thinking. Weird…)