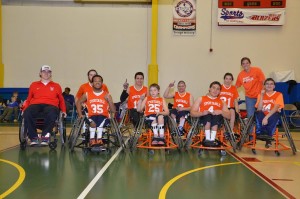 The Sportable Spokes, Sportable’s junior wheelchair basketball team, has recently qualified for the National Championship Tournament! The junior wheelchair basketball program started in 2006 and was comprised of just two players. Since then, the team has grown and has served twelve youth athletes with physical disabilities in the 2014-2015 season!

The Sportable Spokes compete in the Northeast Conference and have traveled up and down the east coast competing against teams in the region. The Spokes have competed in North Carolina, Philadelphia, and Baltimore in the 2014-2015 season. Their performance in these tournaments earned them the 23rd rank in the nation of all registered junior wheelchair basketball teams.

This will be the FIRST year that the Sportable Spokes have qualified for this premier event! “This is such an incredible opportunity for our players, and well deserved after achieving so much success this season,” notes Cole Sydnor, one of the Co-Head Coaches of the Sportable Spokes. “The entire team – players, parents, coaches and the Sportable organization – has sacrificed so much to make this opportunity a reality. We are anxious for the chance to compete at the highest level and make Richmond proud.”

Founded in 2005, Sportable has been helping people with physical disabilities and visual impairments lead an active and healthy lifestyle. Sportable provides the opportunity, skilled instruction and specialized equipment for 12 year-round adaptive sports programs. Partnering with over 25 organizations in the Greater Richmond community, Sportable works to ensure accessibility to facilities for all programs and provides adaptive equipment to its athletes that might be cost prohibitive otherwise. Many of Sportable’s athletes compete locally, regionally, and nationally in their sports. To learn more about Sportable’s 12 year-round sports, please visit www.sportable.org.

Want to support the Spokes as they represent the RVA community at the National Wheelchair Basketball Tournament in Louisville, KY?! You can contribute to the effort by donating at www.sportable.org or through http://www.gofundme.com/spokes where supporters of the Spokes have started their own fundraising campaign. Additionally, those interested in learning more the Spokes can contact Kerry Gannon at Sportable. 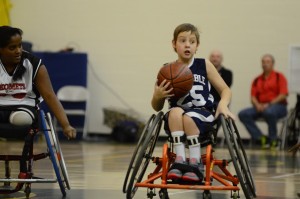