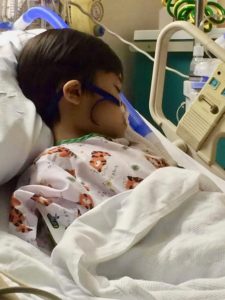 Almost one year ago, 5-year-old Noah Nguyen, woke up in the Pediatric Intensive Care Unit. 24 hours prior to his hospital awakening, Noah was enjoying fun under the sun on a bright June day with his family, which includes his father, mother and two sisters. The Nguyen’s were gathered at a family friend’s house partaking in good food and relishing in care-free summer vibes. It was an added bonus that the house had a nice pool with a spring board. Noah was equipped with a life vest to wear for swim play. In a random moment of curiosity and excitement, the adventurous Noah took off his life vest and leaped from the spring board into the unfamiliar deep water. Noah did not know how to swim. His father immediately swam from the opposite end of the pool in a panic to rescue his son. Noah was pulled out of the pool in a timely manner and eventually vomited out some of the water that he had swallowed and everything appeared to be fine. Ninety minutes later Noah’s parents noticed him starting to dose off. They sensed something was seriously wrong and rushed Noah to the ER and soon discovered he’d suffered from dry drowning.

What is dry drowning?

“Drowning from fluid in the lungs that occurs not during submersion in water, but up to 24 hours after swimming or bathing, defines secondary drowning. If the child inhales water into the lungs, the vocal cords can spasm. The drowning is defined ‘dry’ because it occurs out of the water.” – Dr. Danelle Fisher (parenting.com)

Noah finally woke up the next day under the pediatric doctor’s care. The Nguyen family was rocked by Noah’s incident. Here is the harrowing truth of fear for Noah’s mother:

“The fear of drowning was heavily upon us every time we were near water. My husband and I began to constantly keep our eyes on the kids at all times. We felt like that was the only way to ensure our children would be safe.” 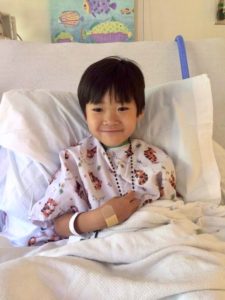 A source of fun turned to a source of tremendous fear for the family after Noah’s drowning scare. Water safety was heightened among the family and treated more vigorously after that day.

The Nguyen’s heard about SwimRVA from people in their community. They decided to enroll Noah and his twin sister, Norah, into summer camp at SwimRVA just shortly after Noah’s hospital release. Summer camp at SwimRVA consists of fun activities in water and on land. It also includes the SwimRVA Swim School’s station-based swim lesson program. This is the same program used in the cost-free Learn-To-Swim program provided by SwimRVA. Noah’s courage and love of water was evident from the start of camp. Watching Noah at camp, you would not believe that this fun-filled child went through a traumatic drowning shortly before beginning summer camp at the aquatic center. Noah started in station 1 of the program and blossomed gradually throughout the summer. 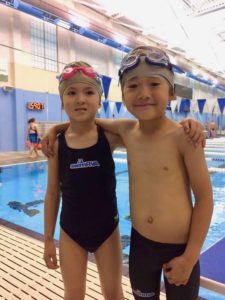 The Nguyen’s returned week after week for summer camp sessions for the entire summer. He eventually graduated from the SwimRVA Swim School. Today, a year after his drowning accident, Noah is a member of the SwimRVA Swim Team.

Mrs. Nguyen credits SwimRVA for her families peace of mind regarding water safety.

“Knowing our children could be okay around water gave us a great relief. Noah is truly proving the statement, ‘what doesn’t kill you, makes you stronger,’ SwimRVA not taught him how to swim but developed a love in a new sport that teaches him to face his fear and that hard work pays off.”

SwimRVA’s Executive Director, Adam Kennedy, had this to say about Noah’s incredible story:

“Noah does not know it but he is a role model. He seeks no attention or acclaim. He is a normal 6-year old. He simply loves to swim. Noah inspires us all with his determination and no doubt saves lives and creates access for others.”

To see the whole story and pictures, click here