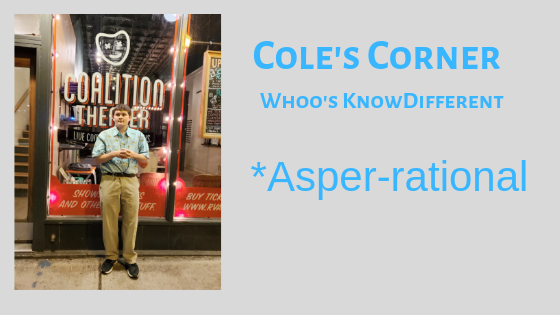 The building we entered was long, narrow and darkened. By the right wall lay a rather small stage-like area, containing little more than four semi-fancy chairs; by the left, a line of foldable metal chairs for the audience. In the far-left corner was a black-iron spiral staircase leading up to a balcony overlooking the floor below. To the right of that staircase was a hall of public bathrooms, and to the right of that was a well-obscured set of drinking fountains. This modest place, located in the heart of Richmond, was the Coalition Theatre. Here, I would watch the performance of Asperger’s Are Us, a group of sketch comedians with the same condition as myself.

The show began with a guided meditation led by a VCU Professor. Together, we all imagined ourselves cozy in bed, resting after a hard day, with a highly venomous spider friend to keep us company. We felt it crawl softly around our bodies and made sure to relax our muscles completely so that we would not startle it. Picturing how many milliliters of its deadly venom would be enough to make us completely relaxed was very restful.

Following this peaceful exercise, five college-aged men in casual attire entered the stage and introduced themselves as Asperger’s Are Us. They explained several aspects of the upcoming show to us. For one thing, the transitions between sketches would be accompanied by one of the members singing a Finnish folk song for “practice”, even though the troupe’s upcoming Europe tour would not take them through Finland; furthermore, at one point or another, they would do something to absolutely infuriate a member named John. They also took the opportunity to advertise their “Ask Me About My Fear of Strangers” shirt, advising us, if we were actually asked, to “run away as fast as possible”.

The bulk of the show was comprised of various sketches. Some that I can recall were as follows:

At the end of the performance, we all sang an “ending hymn”. There wasn’t really a book or any practice for the hymn – we just picked it up as we went. It went something like:

Thank you for this time together

We love laughing with you all

We’re very thankful for this weather

We hope to see you in the fall

We’re glad we got to entertain you

We hope we’ve brightened up your day

We hope you pass away

Then the troupe held a Q&A session. I asked for my student ID back, remarking that I probably didn’t really need it but that it’d be nice to have in case school decided to use it for something. They gave it back, of course, because they’re decent folk. I don’t remember much else about the Q&A, save a key bit of advice they gave for those struggling with social skills – try to follow the rules as best you can, but don’t be afraid to break them from time to time.

I’d give the performance 6.5 passed-away ants out of ten. I’d like to clarify here – a 5 or 6 on this scale is average, not bad. A lot of rating scales in media I consume tend to exaggerate their positive reviews because people tend to see 7s and 8s out of 10 as “not good” or “not worth my time”; but that’s not really conducive to an accurate analysis. Overall, I felt like the performance was pretty good – definitely entertaining, and definitely worth watching – but it wasn’t the best thing I’ve ever watched, nor did it have to be. Some things I personally didn’t like:

-Some of the humor didn’t quite resonate with me. The “infuriating John” scene didn’t really pack the punch I’d expected from it, partially because John seemed more annoyed than furious.

-I also disliked the “James River” sketch because of its child abandonment joke. Don’t get me wrong – I think that that sort of shock humor can be done very well. But the timing and repetition of the joke must be balanced much more carefully than any other sort of joke, or the audience might just get uncomfortable. Personally, if I wrote that sketch, I’d make use of it two times – once at the start of the joke, and once right at the end. The troupe mentioned it in the middle as well, and I think that caused it to overstay its welcome.

-The intentionally bad Finnish singing between scenes got grating after some time. I get that it’s a running joke, but the singing kind of lost its charm after five or so transitions. This is, at least in part, because they used the same Finnish folk song for all of the transitions. It’d be funnier, or at least more interesting if they sang a few different Finnish folk songs poorly instead of the same one on loop.

Anyway, that’s all I have to say on the matter. Thanks for reading, Internet, and I’ll be seeing ya’!