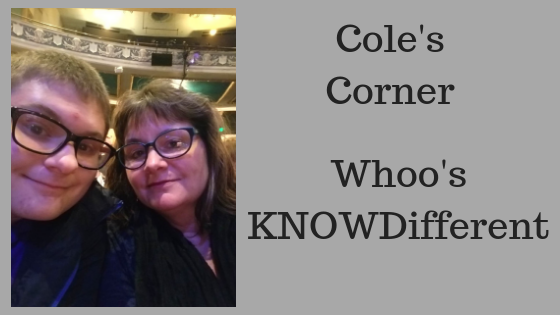 Hello, Internet! Cole here. It’s been some time now – senior year’s been busy – but I’m finally back to writing for pleasure now. Today, I’d like to review a play I saw in October. Its name was “The Curious Incident of the Dog in the Night-Time”, and it was very, very good.

The story of this play is an interesting one. The protagonist, Christopher Boone, is an autistic teenager with an eidetic (photographic) memory and a special talent for math. When he discovers that his neighbor’s dog Wellington has been murdered with a garden fork, he sets out to discover who killed him. In his search, however, he inadvertently stumbles upon a set of letters from his mother… whom his father claimed had died of a heart attack long before the letters’ dates. What he finds in those letters transforms him and his family forever.

The protagonist is one of the most, if not the most, accurately portrayed autistic characters I’ve seen in a work of fiction to date. First, I’ll discuss some of the character’s flaws. Broadly speaking, he is socially awkward and has a childlike mindset for his age. There are several times in the play where he curls into a ball on the ground and screams when he feels threatened or overstimulated, not dissimilar to how my own brother (who has profound autism) faces discomfort. He is also shown to have bedwetting tendencies, and he can’t stand being touched in most cases. This play pulls no punches about the condition – autism can be rather unpleasant sometimes. In fact, the difficulties of raising Christopher factor into the plot significantly, though to say any more might spoil things.

Christopher’s positive qualities should not be understated, however. As stated earlier, what he lacks in social skills, he makes up for in mathematical aptitude. Further, he has an eidetic, or photographic, memory, meaning he remembers everything in minute detail. Mental abilities aside, he cares deeply about animals, keeping a pet rat named Toby and continuing to investigate Wellington’s death even when seemingly nobody else cares about it. When under pressure, he can display a great degree of autonomy, even to the point of navigating a railway station on his own. Even though he has special needs, he is far from helpless.

The set design is odd, yet quite ingenious. The main stage is bordered by a lattice of mesh nets held up by lines of LEDs. The backdrop for the play was a wall of oblong rectangles, juxtaposed almost like those surrounding the Fibonacci Spiral. Downstage right, there was a green prop hill; downstage left, a model train set. Above the stage were two monitors that could display various images. There was even a trench built into the stage itself, though that was probably there long before this play.

These elements weave themselves smoothly into several scenes, some more abstract than others. During the darkest moments of the play, the usually-blue LEDs in the mesh turn a bright red, serving as a surprisingly poignant backdrop.  The “Fibonacci Wall” is actually composed of two halves, allowing it to slide open like a set of hinged doors at certain moments. Characters often lie down on or sit on the hill when they were thinking or talking to friends. When Christopher enters a particularly noisy area, the screens flash several images related to the area in succession, simulating the experience of sensory overload common to those with Autism.

The scene with the train set is perhaps the strongest scene of all. It consists of Christopher building a length of track while a narrator reads aloud the contents of one of his mother’s letters. As the scene progresses, the letter reveals more and more uncomfortable truths, and Christopher builds more and more furiously, as if trying to bury the news under railroad tracks and plastic figurines. When the narrator finishes the letter, poor Christopher gives up entirely, curling into a ball and sobbing loudly until his father finds him. It is a very unconventional way to express a character’s emotional distress, but very effective nonetheless.

My opinion of this play is overall positive, but I do have a few “problems” with it. First, the characters move all over the place. This is not a problem in and of itself, but as a result the microphones they wear are quite conspicuous. I was sitting in the front seat, so maybe those further back couldn’t see them as well, but it was a bit annoying to see the cord on the back of Christopher’s neck multiple times. Also, the lights flashed directly into my eyes at least five different times. The left half (from my perspective) of the “Fibonacci Wall” had a fairly obvious door; since it was used at times to represent the front wall of a house, this error is once again excusable, but it does create a visual imbalance in the wall that didn’t sit well with me.

The closest thing that I have to a legitimate criticism for the play is that the ending is a bit weak. I can’t really spoil anything, but I will say that it wasn’t nearly as emotionally powerful as the middle scenes might warrant.

Overall, I’d give this play a 10.23 out of 11. I don’t know if the troupe will repeat this particular production anytime soon, but if they do it will probably be worth a watch. Thanks for reading, Internet, and I’ll be seeing ya’!