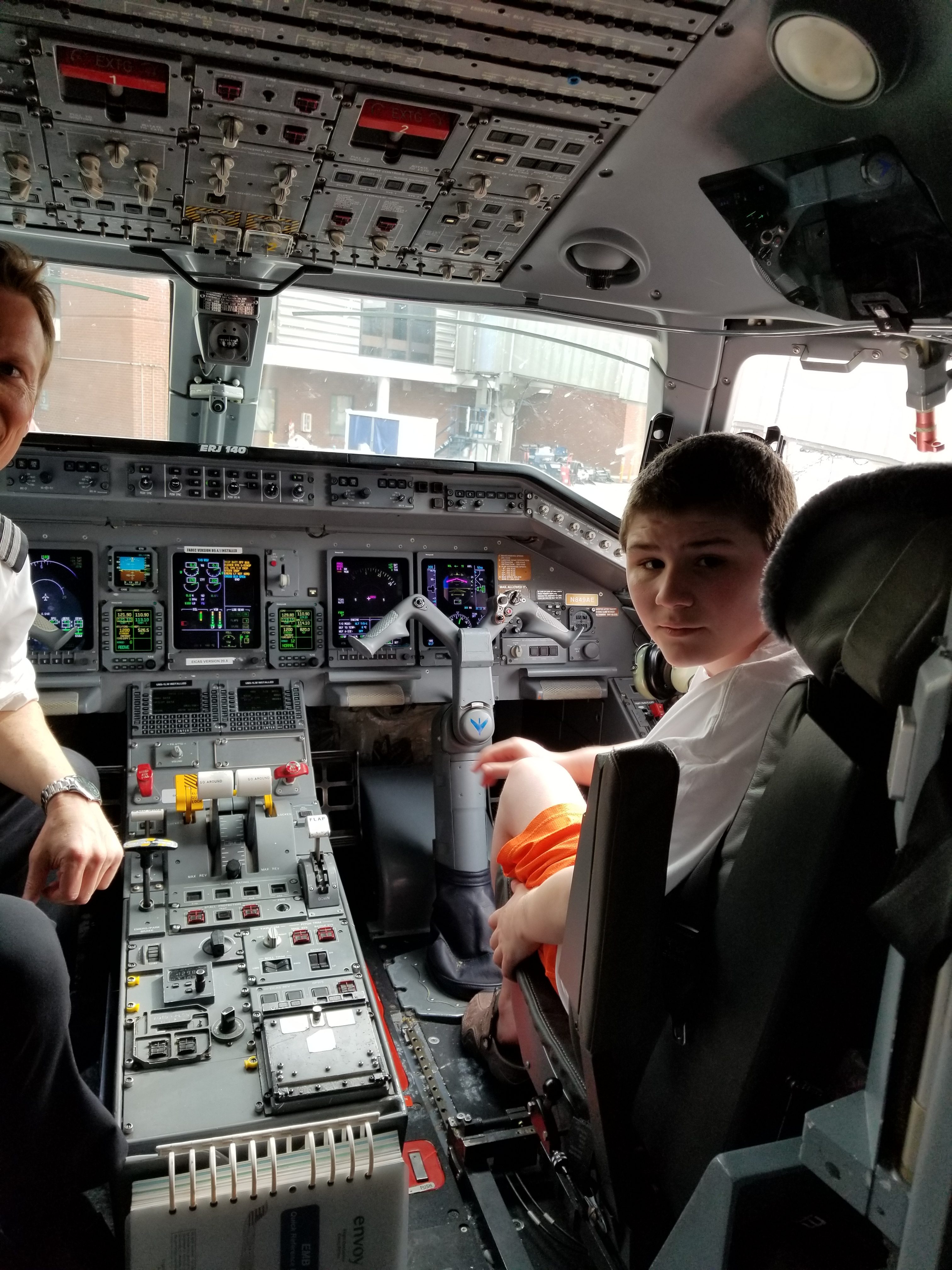 Flying with my son Tyler, who has fairly profound autism, has always ranked in my list of fears second only to nuclear war. And a pretty close second, at that. Although he has made excellent progress in behavior in recent years, I still harbor Autism PTSD-like symptoms caused by experiencing years of public tantrums. Our usual strategy has been to always have a ‘way out’ for public outings in case he needs a break or can’t stay. This has included things like having a respite worker drive separately with us and take him home early if needed; paying for our meal ahead of time and getting ‘to go’ containers for our food in case we need to suddenly bolt; and definitely driving on long car trips instead of flying. I must point out that this is just as much for his benefit as for the rest of our benefit. If he is acting out, something is REALLY bothering him and I am not going to make him remain there. 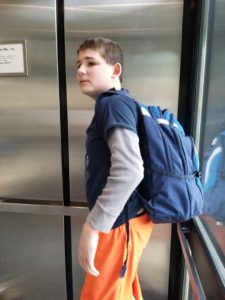 So it follows that airline travel in general poses a lot of challenges for those who have autism and their families. Unpredictability of schedules, sensory difficulties, and long waits make flying hard for all of us, but especially for those on the spectrum such as Tyler. Tyler is a wonderful car traveler, I must say. He rides quietly and is content to look out the window. However, there are definitely times that it would be advantageous to fly. Tyler’s grandparents live in Illinois, so we have a 14 hour trip once or twice a year. We break this into two days both coming and going, which is easier on all of us but takes up a lot of vacation time.

So when I heard about the ‘Wings For All’ program, which helps prepare those on the autism spectrum for air travel, I was hopeful. This program provides an opportunity for these children to practice entering the airport, obtaining boarding passes, going through security, and boarding a plane. I knew we had to give it a try. Locally, the program is sponsored by the ARC, which serves those with intellectual or developmental disabilities. I saw from their website, www.thearc.org/wingsforautism, that there were events at airports all over the country, and that some were coming up at both Richmond International Airport and Dulles International Airport. I opted for Richmond and signed up. To my surprise, the event was free of charge. 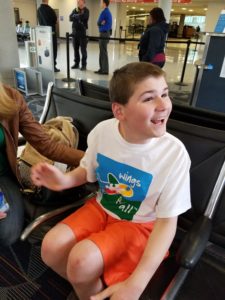 I set about preparing Ty for his airport visit. I wanted it to go as smoothly as possible. We read a children’s book called “Flying to See Janet”, by Laura Vickers. It described an airline trip from the view point of a child with sensory issues. He seemed to enjoy it. I did not realize it at the time, but there was also a social story included with our Wings for All documentation that we could have been preparing with as well.  Ty and I packed Ty’s school backpack with a few of his favorite items – things he could amuse himself with on the plane and sensory items for calming. I enlisted my sister-in-law Anne to come with us for moral support. My husband had an activity with my older son that day and could not go. Only one adult is allowed to go on the plane with the child because of space considerations, but she could help us through the airport and listen to my anxious chatter.

We checked in with no problem, except that I was supposed to have registered Anne even though she was not boarding with us. OOPS. They addressed this issue, and luckily she was allowed to accompany u

s. Security went much better than I expected. I had Ty wear slip-on shoes in case they made him take his shoes off, but they didn’t require it. TSA was very friendly, and probably a bit more lax than usual, since they knew it was a special event and we weren’t actually flying. I almost wished they WOULD make him take his shoes off, just for practice. Ty had a moment of nervousness when he had to put his backpack, which contained all his favorite things, on the belt. He watched it disappear into the dark tunnel of the scanner with mild panic, then looked around the other side, and seemed to be OK once he saw it come back out. Next, we needed to walk through the ‘doorway’ of the metal detector.  The parent was advised to go through before the child, because if the parent was detained, the child might wander off on the other side. Sounded like good advice to me. I expected Tyler to be very nervous about this step, but as usual, when I expect and prepare for Tyler to be freaked out by something, he is totally fine with it.  Next, we proceeded on to the gate. Despite Tyler’s insistence on drinking at EVERY SINGLE WATER FOUNTAIN – both low-mounted and standard-mounted – on the way, it went smoothly. Now came the part where we needed to wait without ‘losing it’ – an

important skill for any air traveler, whether they are on the spectrum or not. The novelty of the whole situation seemed to work in our favor. The first things Tyler spotted were the ‘Arrivals and Departures’ boards. He was enraptured. Something about them being illuminated and constantly updating really floated his boat. He gazed up at them while dancing happily for a number of minutes. After that, his attention fell on the “Charging Station”. He figured its purpose out immediately. Grabbing his tablet and charger from his backpack, he ran over and started charging up. His experience was enhanced by the fact that the chair mounted in front of it was able to spin, to his great glee. That didn’t get old (for HIM) for quite awhile. 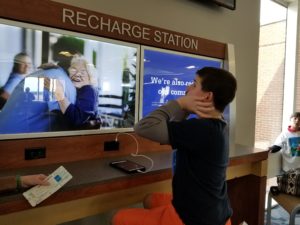 After about a half an hour of ‘practicing waiting’, we boarded the plane without incident. Tyler was intensely interested in the overhead compartments, small air jets over the seats, the fold-down tray table, and ESPECIALLY the cool little bathroom with the tiny toilet. He looked out the window and watched the activity outside. About this time, I struck up a conversation with a Dad across the aisle. He had driven 6 hours to come to the program with his son, as none of the airports near his home were offering a program before their planned trip. He was preparing his son for a trip to Africa to meet some of his family. Apparently, that trip is a total of 14 hours of flying, with a stopover at Heathrow. Suddenly my goal of flying 2.5 hours nonstop to Minnesota with Tyler seemed much more attainable!  We got to hear the safety announcement, taxi around the airport, have a ‘mid-flight’ snack, and, as an added bonus, got special permission from air traffic control to taxi down the runway at a faster speed, as we would if we were taking off.  When our little trip was over, we practiced patience as we waited our turn to go up the aisle to the plane. Each child was allowed to visit the cockpit and meet the pilot, which was both really awesome and a really bad idea because I guarantee all those kids will want to do it again when they are there for their real flight! 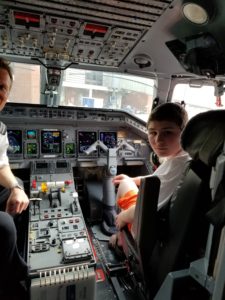 After our plane adventure, there was a little reception with kid-friendly food, the flight crew and other American Airlines personnel, and even Nutzy the Squirrel, mascot of the R

ichmond Flying Squirrels baseball team! Tyler was entranced by Nutzy, which was another first for him because he has historically been terrified by costumed characters, most notably the Chick-Fil-A cow.

All in all, Tyler’s visit was a great success, and I predict (knock on wood) that he will have a successful first flight with our family in June. I am very grateful to ‘Wings for All/Wings for Autism’ and the airlines for providing this service. 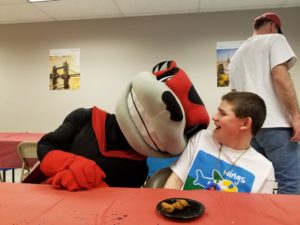 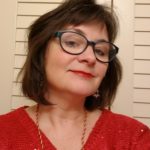 Cindy Szymonik lives in Glen Allen and has a child with Asperger’s and a child with autism. She has had 17 crazy years in the local autism community.