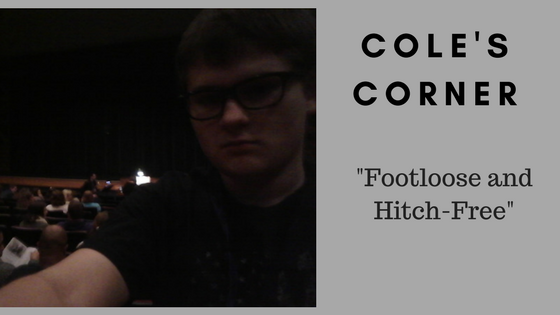 Hello, Internet! Cole here. This month, I attended Deep Run’s production of the musical version of Footloose. I didn’t expect much out of it; it was a high school play, after all, and I mainly went to obtain a point for National Honor Society. However, I soon discovered that my initial judgment was wrong: the play went excellently, showcasing an interesting plot, above-average acting skills, and a devoted backstage crew.

The story follows young man Ren MacCormack (here played by W., whom I will discuss later), who moves from Chicago to the Texan town of Bomont with his mother following his father’s abandonment of the family. He soon discovers that Bomont is extremely socially conservative – certain books are banned, and rock music and dancing are both illegal due to their tenuous connection with a tragic accident five years prior. He tries to fit in, but the town perceives him as a troublemaker because of his status as a foreign newcomer – especially Reverend Shaw, the town’s political and religious leader. Soon, however, he befriends Willard, a quiet yet hot-tempered classmate, and Ariel, Rev. Shaw’s rebellious daughter. Together, they attempt to lift the town’s ban on dancing and rock music and host a school dance.

Prior to the play, I’d never seen Footloose in any form, and the most I knew of the plot was that dancing was forbidden or something. Having watched the play I now consider it a solid, attention-worthy plot. The characters had clear motivations – Ren wanted to dance and to get over losing his dad, Ariel wanted to oppose her father and become independent, and Shaw wanted to protect his daughter and the town from what he considered corrupting influences. These motivations all made sense, fit well into the plot, and explained the characters’ actions effectively; for instance, Shaw disapproved of Ariel’s going out with Ren because the town considered him a troublemaker while Ariel continued to go out with him to spite her father. The premise, Ren’s quest to host a dance party in the face of an oppressive town, is quite unique: it follows certain common sentiments in fiction, such as youthful rebellion against oppressive elders, in a story I haven’t seen very often in other works. In all, the narrative was watertight.

The play didn’t just succeed on the merit of its story, of course: that story was backed by an impressive retinue of actors. Chief among the cast was W, who played the lead role of Ren. I admit a degree of bias towards W’s performance; he sits next to me in one of my classes and is known for his acting skills. Nevertheless, I can attest to his acting prowess. He voiced his lines clearly, fluently and passionately, and his body language was just as expressive. In one scene, I recall, he even performed a small feat of acrobatics with a jump-rope.

Also of note was R, the young man who performed the role of Reverend Shaw. R spoke with a deep, serious tone throughout the play, effectively conveying Shaw’s respectful yet commanding personality. He was an exceptional match for the character and a decent actor, and I commend the person who gave him the role.

Most of the other actors were just fine as well – none of the others really caught my attention, but I didn’t have too many problems with them either. I recall that one actor forgot his lines for a brief moment, but the play had no large flubs besides that.

Finally, I come to the backstage work – namely, the set design and the lights. A lot of effort went into this play’s construction, and it showed.

The set depicted several integrated portions of the town of Bomont, making it highly versatile for the different scenes. Left stage contained an elevated bridge area; this section served as both a secluded bridge where Ren and Ariel talked privately and as a pulpit for Reverend Shaw during sermon scenes. The center stage was of little note – just a stable and a sign that said “Welcome to Bomont” – but it helped introduce and build the setting a bit, which made it worthwhile for general scenes. The right stage, finally, contained an artificial house – namely, that of the Shaw family – for scenes following the family’s internal drama. Each location in the play was represented somewhat effectively, making the story easier to follow.

The lighting did everything that lighting should and a little more: it illuminated the important characters and locations in each scene, as one expects lighting to do, and it also changed color to match the mood of the narrative at given times. In a downbeat song about Bomont’s hostility towards Ren, for example, the background turned a deep blue; in a more excited song about opposing Bomont’s restrictive anti-dancing law, it became a warmer color. These visual cues accentuated each part of the play, making it overall more compelling and poignant.

This play was quite possibly one of the best high school performances I’ve ever seen, or at least the best I’ve seen in a while. The acting impressed me with its expressiveness and overall competence, the story compelled me to keep watching, and the backstage design amazed me with its beauty. I give it 19 dabs out of 20 overall and would highly recommend it if it were still in production. Thanks for reading, Internet, and I’ll be seeing ya’!