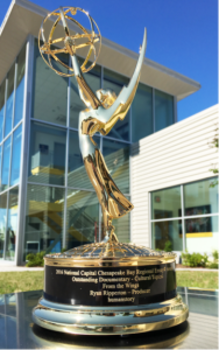 We are thrilled to announce that SPARC and humanstory (filmmakers) have won an Emmy Award for FROM THE WINGS: THE LIVE ART STORY, the feature documentary about the creation of our LIVE ART program!
The film has been airing on PBS stations all around the country, and as a result, it became eligible for Emmy Award consideration. The film was nominated within the National Capital Chesapeake Bay Chapter of the National Academy of Television Arts & Sciences, whose 59th Annual regional award ceremony was held in Washington, D.C., this past Saturday evening.

The documentary follows six students from SPARC’s inclusive arts education program for students with and without disabilities, LIVE ART. It also follows their families and several staff members, and chronicles how the children and adults face their own fears, learn what empathy really means, and discover countless things they didn’t know about themselves and the world around them. The experience culminates in an inspirational night of music, dance and visual art—including a performance by recording artist Jason Mraz—that unifies students with and without disabilities before a sold-out audience at the majestic Carpenter Theatre.

The award named Martin Montgomery and William Gaff (of humanstory) as Directors/Producers, and Ryan Ripperton as Producer — the last of which represents the significant contributions of many members of the SPARC staff, especially Erin Thomas-Foley and Candace Mraz, who also worked tirelessly on producing the film. We also owe a huge debt of gratitude to our friends/partners at WCVE, especially John Felton and Curtis Monk, without whom the documentary would not have achieved national distribution on PBS. We must credit the contributions of many staff and faculty members, students, families, volunteers, and board members, and guest artists whose passion and commitment to inclusive arts education are the heart of the film. And of course, the documentary wouldn’t exist without the hundreds of donors who contributed to its funding.

We don’t know yet how or where we’ll display the statue, but we are honored and excited to add “Emmy Award-winning” to SPARC’s list of accolades!
If you don’t already own a copy of the Emmy Award-winning FROM THE WINGS, you can purchase a DVD copy at SPARC or a digital copy at https://vimeo.com/ondemand/fromthewings.

Fly, Fly, Fly, Little Bird!
About the Filmmakers Martin Montgomery is a graduate of Longwood College and has been filming live events, short films and commercials for over ten years. His work has won several film festivals, two regional Emmys and one of his films took part in the Cannes Film Festival. He is always seeking new ways to evoke emotion through moving images and discovering new topics to explore.
William Gaff has been a creative storyteller for the past 15 years. He has produced and edited hundreds film and video projects for broadcast, corporate and nonprofit organizations, advertising and event films. His work has won a regional Emmy and has been nominated for a national Emmy. He continues to explore ways in which filmmaking and journalism are merging and evolving into exciting new ways to tell stories.
Together Martin and William have formed the documentary film company called humanstory. With humanstory they have produced a range of films that have redefined storytelling for corporations and helped bring nonprofits’ legacies to life.

For more about SPARC and the classes offered, see the website here.