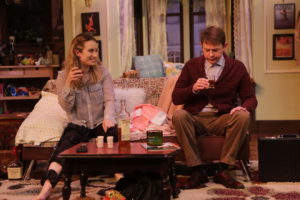 Dancing Lessons tells the story of Ever, an introverted young professor with Asperger’s Syndrome, who seeks out instruction from his neighbor, an out-of-commission Broadway dancer. As the unlikely relationship unfolds, the two make hilarious and heartwarming discoveries about themselves and each other. A quirky romantic comedy, Dancing Lessons made its world premiere at Barrington Stage Company in 2014.

This production is directed by Jan Guarino. Guarino most recently directed They’re Playing Our Song at Hanover Tavern and Busytown at the Children’s Theatre. Other directing credits include The Wizard of Oz and Barefoot in the Park. Guarino is a veteran actor with numerous Virginia Rep credits including The Charitable Sisterhood Christmas Spectacular and God of Carnage.

Dancing Lessons is part of the Acts of Faith Theatre Festival. Virginia Rep will host an Acts of Faith talk back on March 5, 2017 following the performance.