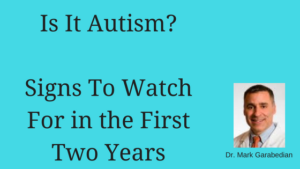 Recently in my office I saw a 20 month-old male for his well-child check-up. He has been a regular patient of mine since birth, and he is generally very healthy. Before I went in the room to examine him, I noted he was making noises verbally that were not age-appropriate. I entered the room to find a cranky, tired toddler.

As is typical, the evaluation started with an interview of the parents to review topics such as growth, any recent illnesses, medications, allergies, feeding and sleep patterns, and finally development. During the interview I continued to also observe the boy. He cried intermittently and no intelligible words were noted. His eye contact was fleeting and he didn’t point to express needs. Upon further questioning, the parents reported that he only followed the most basic commands (“come here”) and often wouldn’t respond to his name. He would flap his hands when excited and he liked to stack his food. When playing with a toy phone he would only push the buttons and not pretend to speak into it. A survey to screen for autism at the 18 and 24 month well-checks (M-CHAT-R) was done, and the results were suspicious for a diagnosis of autism.

During the first year of life, typical signs of autism are not apparent, but there may be very subtle observations. The baby may be unusually quiet or very irritable and difficult to put down. He may show problems with feeding, refusing bottles or resisting solids.

From a behavioral perspective, repetitive movements are typical, such as spinning around, flapping of hands, flicking fingers, though none of these behaviors are diagnostic of autism. In addition, children may prefer toys to be in a certain place or arrangement, and can become distressed if they are not.

Toddlers who end up having autism will generally have delayed speech. Language can be very repetitive and frequently will consist of phrases they have heard others use (echolalia). Often times it is just certain sounds that are repeated. Jargoning, a typical precursor to speech, is not commonly seen.

From a social standpoint, toddlers with autism generally prefer to play alone, or only superficially with other children (less interactive to-and-fro play). Often times they will play by themselves with a toy or other object for hours. Children with autism may not point to objects of interest or need, won’t play social games (like peek-a-boo), rarely engage their parents spontaneously by sharing books or toys, have poor eye contact, and do not seek out other children to play with.

Autism is a spectrum disorder, characterized by problems with social interactions, language, and repetitive behaviors. Not one of the characteristics cited above, when considered individually, is diagnostic of autism; however, if you have observed in your child several of the features reviewed above, or you just have a gut feeling that something “isn’t right” with his development, discuss your concerns with your pediatrician.

As for my patient, the areas of concern were discussed with his parents, and his development will be followed closely in the next few months. Follow up with Early Intervention and a Developmental Pediatrician were also discussed as a necessity if progression in development is not noted as he approaches 2 years of age.