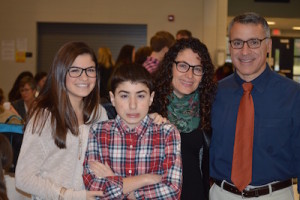 This past week, a few “little” things happened that I realized were not so little for us. It got me thinking about how much is taken for granted in the day in- day out life of kids that do it “typically”.

I was so excited about this and in sharing with my friends, I realized, I also need to share it with you all. You guys are an extension of what I live and like you reach out to me with your stories, I want you to have a glimpse into ours.

So, here it is-
Marky has friends. Not friends that I set up for him or friends whose parents are our friends that come over. Although he has those too, he really has friends. Friends that CHOOSE to be with him and friends that change plans to make it work for a time that works for him! Now, I know Marky is likable, he is really charming and so easy. BUT, he doesn’t ask to go anywhere, or spend time with anyone in particular- he just kind of goes with the flow.

Here are our 4 moments.

1. His 13th birthday party- he made the list, he chose a few friends he wanted there and it was only boys. He had a great time playing on the game truck. In past years, I made the list and he just showed up!

2. His friend invited him to a movie and when Marky could not make it, his friend did NOT go, he waited a whole additional week so he could share it with Marky! It was the sweetest thing. (Added bonus, this young man who asked Marky also crossed a hurdle in that he tends to see movies on opening day and was able to wait! ) Such little things that are so enormous for us!

3. A classmate who also has Autism and has been a friend of Marky’s for years invited him over for a sleepover. I was not sure, I was so anxious, I was so ready to say no! I asked Marky and he said YES! We had a plan in case it did not work and I was up checking my phone all night- he slept through the night and had SO much fun! It was HUGE! They were both so happy!

4. He was awarded an honor at school for having INTEGRITY. When I asked him what that meant, he said ” Doing what’s right, like me”. He is so correct, he does what is right. He aims to please and loves to help. How incredible is it that his teachers see this in him and he got a chance to be on stage to be acknowledged! YAY!

I see my young star growing up right in front of my eyes and it is scary, I know there are many things we need to look at and address and I will. This is the year, but, for now, we are celebrating these moments. They feel so good! 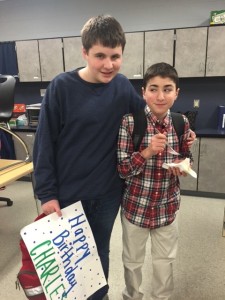