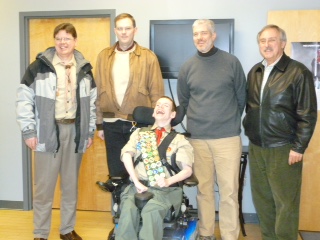 Ryan Burnett was awarded Eagle Scout Rank on January 31, 2015.  This is especially triumphant for Ryan since he uses a power chair for mobility and a speech computer to communicate for Scout ranks and merit badges.  Ryan has had to rely on this equipment due to Cerebral Palsy.

In 2006, Ryan started as a Wolf in Cub Scouting with his brother, Eric.  They have been buddies all through Scouting.  We were not pursuing Scouting previously.  However, while looking at a homeschool informational email, a particular item seemed to leap off the computer screen:  Christian Homeschool Scout Pack and Troop.  We called the Scoutmaster inquiring if boys who use wheelchairs may join.  The Scout leader said “Sure.”  The troop was founded as being open to any interested boy but specifically focusing on the homeschool community.

The small group of boys and families had only been meeting since 2004 but had such a friendly bond among them.  They treated us as family, and we got involved promptly.  From the beginning, our family went to almost every event and outing that the troop offered.  We knew the key was to get immersed in Scouting with the other Scout families.  Both the boys and the families were accepting of Ryan and treated him like all the other boys.  Only once, do we remember a young Cub Scout boy treating Ryan differently in the nine years that we have been connected with Scouting.  The father of the young boy immediately coached his son about how to treat Ryan, and from then on, the boy became a good friend to Ryan.  Parental involvement in the troop definitely made the difference in how accepting and encouraging many of the Scouts were to Ryan.  We believe that because so many of the parents set positive examples of how to talk to Ryan and interact with him, that this was the main reason that their sons felt as ease with him. One Scout would get on Ryan’s eye level and hold Ryan’s hand while telling him about what he had been up to each week. The Scout’s mother had modeled this various times to her son.

We went on Scout family campouts with Ryan and Eric.  It was not easy for Ryan or us, but the effort was rewarding to our family.  With help, Ryan was able to sleep in a tent, roast marshmallows, fish, participate in archery and BB guns, and make handicrafts on many of the outings.

Selling popcorn was one of the highlights of our Scouting experience! We did not set out for Ryan and Eric to be the top fundraising sellers in both the Scout pack and Scout troop, but they were for seven years.  Both Ryan and Eric sold Boy Scout popcorn door to door from mid-August to mid-December.  In the hot summer, we were selling and during the cold fall months, we were delivering door to door.  In 2012 they sold $10,798 worth of popcorn combined.

Going door to door had its issues. Instead of using Ryan’s power chair, we had to use his manual chair to get up curbs, down gravel driveways, and along bumpy sidewalks. On the positive side, we met countless friendly people who were genuinely interested in Ryan and Eric.  Many of the men would sit down on their front steps and tell our boys about their Scouting days.  Some would get nostalgic when relaying their experiences.  Numerous former Scouts would encourage Ryan and Eric not to quit before reaching the rank of Eagle Scout.  We loved talking with the people!

The Hiking merit badge was one of the tremendous obstacles to overcome for both Ryan and his parents.  One part of this required badge for Eagle rank was to go on a twenty mile hike in one day.  Thankfully, our troop planned one just when Ryan needed to begin this badge.  We went on a cold February Saturday with approximately twenty Scouts and their parents and actually hiked almost twenty-five miles on an urban hike around the James River.  This was probably one of the hardest requirements that we took on together.  Going over gravel, hills, dirt paths, and cracked sidewalks were some of the hardships that we had to overcome.  We used a heavy duty rope to pull Ryan up steep hills, with one person in the front while another person was pushing from behind.  Starting at 8 A.M. and finishing at 6 P.M. in the rain, it was a demanding day but one of considerable accomplishment.  Not only did Ryan do the required twenty mile hike, but five additional ten mile hikes, as well.

Ryan was able to participate in two Scout summer camps and two Scout winter camps. The Scout staff and counselors were very accommodating to Ryan’s needs and abilities.  He was able to complete numerous badges with other Scout campers, such as Nature, Geology, Mammal Study, Genealogy, and Railroading.

Every Scout desiring to obtain Eagle Scout rank must execute an Eagle Scout project.  After praying about what his project should be, we determined that promoting Miracle League Baseball of Richmond would be a fun project that would involve Ryan’s abilities more than the Scout tradition of building something.  The Miracle League organization enables special needs children to play baseball on a rubber turf field with volunteer buddies.  Ryan has enjoyed playing baseball with Miracle League since 2009.

Eric has had much experience in videography and especially working with Ryan one on one, so we were excited when his project got official approval from Boy Scout officials.  Karen Pusey, director of Richmond’s Miracle League Baseball, was especially supportive of Ryan in organizing and executing his project.  Ryan’s Scout troop volunteered as buddies to the Miracle League players during a game while a professional videographer filmed and photographed the game.  Ryan’s promotional video has been able to benefit Miracle League Baseball by demonstrating how much fun it is to both play and volunteer. His Eagle Scout project promotional video can be viewed on YouTube: https://www.youtube.com/watch?v=J1aKn68K9lw

After almost 5 years from crossing over from Cub Scout to Boy Scout, Ryan’s last hurdle was the Eagle Rank Board of Review, the final meeting of the Eagle Scout candidate with local and district Scout leaders.  The Scout leaders met an hour with Ryan and his attendant to discuss Ryan’s Scout work toward Eagle and his Eagle project.  At the end of the meeting, four Scout officials pronounced Ryan Burnett as an Eagle Scout. After having served as Troop Bugler and Assistant Senior Patrol Leader and having earned thirty-six merit badges, this honor is one of Ryan’s most memorable.  We are extremely grateful to his Scout troop, Scout families, Eric, Ryan’s attendants, and most importantly, Jesus.