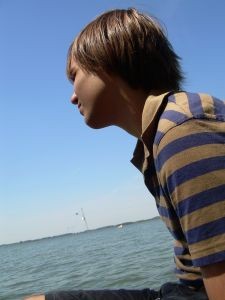 Most mornings are the same – I tell H.* to get dressed and he puts his pants on his head while wandering around asking me if I’ve seen them. I tell him it’s time for breakfast and he yells, “You’re not the boss of me!” When we leave the house he pretends to hit me and says he’s just kidding. By the time the school bus comes I leave for work already exhausted mentally, physically and emotionally and we still have to get through the evening.

When H. was four he was diagnosed with ADHD combined and sensory issues. Instinct told me there was more but he was eight and a half when the doctors determined it was pediatric bipolar disorder. When they told us, I asked why it had taken so long for them to diagnosis it because he’d been having the same issues for a long time. They said it’s because pediatric bipolar isn’t a diagnosis given easily or lightly. Adults with bipolar can have a manic episode (they’re overly happy and get easily irritated) then a depressive episode or both at the same time (i.e. mixed state). In children, the cycling is much more rapid and depression may or may not be present. It now made sense why H. could go from sweet to overly silly to bossy to oppositional to explosive to crying in the span of a day. It also explained a lot of his behaviors.

He talks a mile a minute and will focus on a topic like a dog with a bone asking question after question and refusing to accept any answer that he considers “wrong”. He has the emotional level of a six year old and tells people, including teachers, they don’t know what they’re talking about or what they’re doing.

School has been very challenging. When H. was four and a half we enrolled him in the federal program pre-k at Elementary School*. A year later he was enrolled in a mainstream kindergarten classroom where he was suspended, or “early release” as the principal called it, 20 times. For over a year we met with Elementary School’s administration time and again to discuss an IEP and a BIP. They granted the BIP immediately but it was another year before they granted the IEP, even though his behavior constantly disrupted class. According to them, because his behavior wasn’t affecting his grades he didn’t qualify for an IEP; by the time he did we were in crisis mode.

Once the BIP and IEP were put into place things were a little better but he was still being suspended. I remember when the principal said Elementary School may not be the best fit for him. That sentence came back to haunt him because when H. entered third grade his behavior worsened to the point he was getting suspended every day he was actually in school which, from September to October, was a total of five days. I was so angry and fed up with Elementary School I took action.

I contacted our state Department of Education and told them about our fight with Elementary School – how they kept insisting there wasn’t a problem and their refusal to accept the letters from his doctors stating he qualified for an IEP. I’ll never forget crying on the phone to DOE’s parent liaison and the principal of his current school, Education Center*, telling them everything and asking why Elementary School hadn’t told us there was an alternate public school for kids with issues such as H.’s. I then informed Elementary School’s administration the DOE was very unhappy with them and I had done their job by finding another school for H. and wanted him transferred ASAP. A week later we got what we wanted and, more importantly, what H. needed and have never been happier. H. still has problems, including using profanity and threatening staff, but Education Center is equipped to handle it. If he’s really out of control they call and I talk to him. Sadly, the first thing out of my mouth is, “What did he do THIS time?” I still remember Elementary School’s principal asking why I always assumed there was a problem. I asked if he had good news but he didn’t and he never said anything about it again. Education Center automatically says, “There’s nothing wrong!” if they’re not calling about a problem but that’s because they understand. This is one of the many reasons we love them.

Medication is another roller coaster. He’s been taking medication for ADHD since he was four but we’ve spent two years trying to figure out what would help the mania. A medication would work for a while but then he’d complain about being itchy or the tics would start and we’re back to square one. We recently learned one of his medications causes mania and the doctor thinks it’s also causing his tics. Sometimes while filling his weekly pill containers I want to throw them against the wall because I hate having to give my CHILD all these medications because of something out of his control. Because he has a mental illness.

This article emphasizes our struggle with H. but he has some wonderful qualities. He loves cuddling and giving hugs, is extremely polite including running ahead so he can hold doors open while saying, “Ladies first!”, says the funniest things and has an imagination beyond anything some of his teachers have seen.

Unfortunately, most people only see the negative behavior. When I mention he has bipolar they just look at me and I know they’re thinking about what they’ve heard/read/seen about bipolar but in adults. Few people are aware children can have bipolar. That’s why I’m spreading the word by talking, tweeting and blogging about it. I believe the more people learn about and become familiar with pediatric bipolar the less of a stigma there will be and that’s my goal for all mental illnesses; to get rid of the stigma.

Anita Resnick is a mom-on-the-clock with a beautiful adult daughter and pre-teen son that divides his time between making her laugh and wanting to pull out her hair.  She lives in Virginia, is addicted to reading and The Big Bang Theory and considers dinner, going to see a superhero movie and hitting up the bookstore an ideal date night with her husband of 20 years.  You can follow her blog, I Should’ve Read the Fine Print, herehttp://anitarezz.wordpress.com/